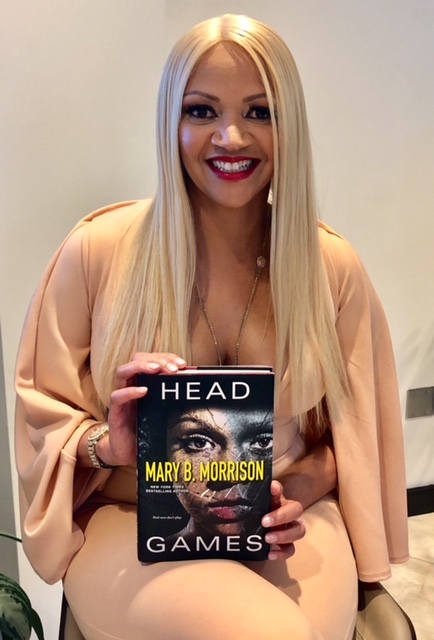 Mary Honey B. Morrison was recently on BAN Radio Show discussing her August new release, Head Games and her other 2 non-fiction titles. Listen to the show here: http://tobtr.com/s/10895553. I will post her other books in my comments section.

New York Times bestselling author Mary B. Morrison believes that women should shape their own destiny. Born in Aurora, IL, and raised in New Orleans, LA, she took a chance and quit her near six-figure government job to self-publish her first book, Soulmates Dissipate, in 2000 and begin her literary career. Mary’s books have appeared on numerous bestseller lists. Mary is actively involved in a variety of philanthropic endeavors, and in 2006 she sponsored the publication of an anthology written by 33 sixth-graders.

In 2010 and 2014, Mary produced a play based on her novel, Single Husbands, which she wrote under her pseudonym, HoneyB. Her wonderful son, Jesse Byrd, Jr., is the owner of Oiseau Clothes and writing novels for adolescents. Mary currently resides in Atlanta, Georgia. Visit Mary Honey B Morrison on Facebook, Twitter @ marybmorrison, and at MaryMorrison.com.

* Head Games by Mary B. Morrison

* Dicks are Dumb: A Woman’s Guide to Choosing the Right Man by Mary B Morrison

From childhood games to career challenges, Trymm, Dallas, Kohl, and Blitz have stayed the best of friends—and each others’ toughest competition. These bachelors live to party up, sex it down, and get it all. And now they’re betting on which of them can “date-and-dump” the most women in a month—and post the proof on social media. Winner takes all: a cool million dollars. But this game is about to get all-too-real…

Trymm has no problem bedding married women looking for quick-and-dirty satisfaction . . . until he falls hard for one he can’t have. A cynical ex-soldier battling PTSD, Dallas woos a hopeful bride to exhaust her savings for picket-fence promises—just to humor his boys. Kohl enjoys his best one-night stand with a mysterious beauty—but his recklessness backfires big time after he exposes her. And Blitz thinks he’s giving a powerful Fortune 500 executive the business—until he gets played…

Now everything they care about most—money, family, and friendship—is on the line. All the right moves won’t keep them safe—especially from each other. And the only way out of the game is to concede or risk everything on a dangerous gamble they can only lose…