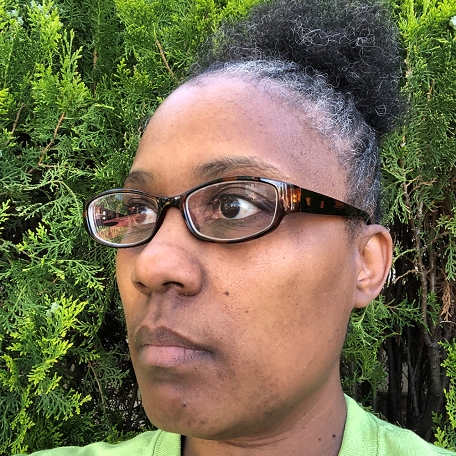 Deatri’s mother was told that because of Deatri’s dyslexia, she’d never learn how to read. My have times changed. Deatri started her publishing career as an editor at Third World Press, Inc., one of the oldest independent, African-American owned publishing houses in the world. Fiction is her true love, so a few years later she began focusing her editing skills on fiction. She’s edited novels by such notables as Gloria Naylor, Beverly Jenkins and many more. Along with editing, Deatri also began writing. Thirty some published titles later, she still hasn’t figured out she wasn’t supposed to learn how to read.

BPM: What inspired you to become a romance writer? How long have you been writing?
When I was a child, my mother wasn’t a big fan of television series, but she never missed airings of old romance movies. I grew up in a household where Doris Day and Debbie Reynolds fell in love in the most dramatic ways just about every weekend, and I loved every minute of it. If my mother wasn’t watching old movies, she was reading Harlequin romances. At the time, my mother’s married life was nowhere close to the romances we watched and enjoyed. When I began writing, I had control to give every princess her prince charming.

BPM: How do you think you’ve evolved creatively?
I’ve been married over thirty years and have children, grandchildren, in-laws. Lived through deaths, births, divorces, marriages. Been hired and fired from jobs. These fifty-some years, my experiences changed my outlooks on life and given me more depth. As we grow older, we see the world in different ways. This tends to affect one’s creativity. I’m hoping it’s for the best in my case, but we’ll see (smile).

BPM: Do you view writing as a kind of spiritual practice?
Not really. I used to tease that writing was my way of putting my psychosis to work, by writing the voices into books. That all changed when my father was diagnosed with two forms of terminal cancer. That’s when the voices stopped. I was writing the forth book of a series that he was the inspiration for. I didn’t finish the series and Best Laid Plans is the first book I’ve written since he passed three years ago.

BPM: How has writing romance novels impacted your life?
I let those voices in my head tell their stories. You will see mental illness, abuse, neglect… You know, things that aren’t romantic. You’ll also see compassion, love and triumph. When readers contact me saying how they saw themselves in my characters and appreciate how someone understood how they feel, that you touched their heart—I find it humbling.

BPM: What was one of the most surprising things you learned while creating your body of work?
This was early on in my writing career. I’d always read books by all races of people. Back then, it was difficult to find titles by Black authors, plus schools had you read works by non-black authors. I never had an issue relating to characters who weren’t my race because I’ve always had to.

So when I began writing and began hearing whites saying they couldn’t relate to Black characters, I was taken aback. I grew up watching White women fall in love and reading books full of non-Blacks and had no issue “relating” to the characters.
Love, hate, anguish, triumph, loss… are universal.

BPM: How do you find or make time to write? Are you a plotter or a pantster?
I’m an empty nester, so have time to write. When my children were home, I’d write before they woke or after they went to bed.
I’m a cross between a plotter and pantster. Before I start writing, I have about 90% of the book plotted out in my mind. Once I start writing, I go with the flow and it ends up about 70% to what I had in my mind.

BPM: Have you considered writing in another genre?
I also write suspense and I have an urban fantasy I want to write.

BPM: What is your story in Love Like It’s Hot about?
In Best Laid Plans, Abisola Tersoo, a gracious woman of beauty, kindness, and focus, knows there has always been a plan for her future. Someday she will take over her father’s business and Max Osborne, a man dear to her family’s heart, is to be her husband. Just when Abisola has accepted her life always goes according to plan, Thomas Hoffmann, a fantasy of a man, brings chaos into her life in the best and worst ways. Torn between following the plan with a real man and risking it all for a fantasy, Abisola learns she may not have a choice.

Thomas Hoffmann didn’t realize he was looking for someone special until Abisola walked into his life. A man of the world, he had become a little jaded, but Abisola’s quick wit and creative spirit sparked an interest in him unlike any he had ever experienced. One who lives in the moment, he can see spending the rest of his moments with Abisola, but others’ plans may get in the way.

BPM: Give us some insight into your main characters. What makes each one so special?
Romance books follow a formula, so I can’t say my hero and heroine are any more special than any other romance hero and heroine. I will say that what makes this novella special is my take on the 4thof July theme. When I was young, I was told that America is a melting pot.
To my family that meant that we lose our culture to assimilate into the dominant culture (Yeah, we were that family, and I’m proud to say I carried that on to my children). Instead, we chose follow the America being a salad with all the differences complementing each other. Best Laid Plans ties into both of these. I look forward to discussions to see what others think of this topic.

BPM: What was your hardest scene to write, the opening or the close?
The close. I tend to deal with heavy issues in my romances that take an emotional toll on readers in ways that aren’t conducive to the happily ever after readers expect from a romance. So I have to ensure to wrap things up appropriately and give that happily ever after.

BPM: Do you want each book to stand on its own or do you prefer to write series?
I prefer to write stand-alone books, but my readers seem to always want to know about the other characters, so I end up writing series. Even with my series, I try to write so that each book can stand alone.

BPM: Does writing energize you?
The writing itself doesn’t energize me. Reading the book a few weeks after it’s completed editing energizes me. It’s kind of like my gym workouts. I enjoy getting my workout on, but it’s still work. Seeing the results of the workout is what energizes me and encourages me to continue going.

BPM: Do you believe in writer’s block?
No. When I released titles every few months, there were times when I needed to step away from my current project because I needed distance from it to think clearly again. I’d work on something else, then come back to it sometimes a week or two later.

BPM: Is there a certain type of scene that’s harder for you to write than others?
Sex scenes. I was at a conference and learned that many authors also write those last.

BPM: Have you written any other books that are not published?
Yes. I have two books that I wrote that are AWFUL. I wrote them when I was early in the writing craft. The head hopping I did should have been illegal. Early on I said I’d rewrite them, but I doubt that will ever happen.

BPM: What projects are you working on at the present?
I’m learning the craft of screenwriting. A pilot I wrote called Dangerous Games is getting some attention. I start a six-week class on pilot writing soon and hope to complete my second pilot during that course. I’m currently writing a piece for the Still Standing anthology. I along with four other authors are writing fiction and nonfiction pieces about how cancer affected our lives. This title will be released in October. I’m also completing a romance novel.

BPM: Tell us about your most recent work beyond this collection. Available on Nook and Kindle?
My most recent work was Dark Geisha, the third book in the dangerously-sexy suspense series I write with Curtis Alcutt. This is a series that should be read in order. Roman and Jeanette, the two main characters, are my two favorite characters to write. They are flawed, but two of the most loving people in their own crazy way. The series is available on Kindle, Nook and in Print on Amazon. The order is: Roman & Jeanette, Hell Hath No Fury, then Dark Geisha.

BPM: What is your preferred method to have readers get in touch with or follow you?
The majority of my readers just want to read my next book, so I suggest signing up for my announcements. I only send them out when I have a new title or if I’ll be at an event. If they want to email me, they can do so through my website. Here is the page to sign up for the special announcements and to email me.

BPM: How can readers discover more about you and your work?
The only social media account I actually keep up with is my Facebook one. I ask that you don’t send friend request, but instead, subscribe to my page. Facebook as a limit of friends they allow, so I no longer accept friend request. But you can have unlimited subscribers: https://www.facebook.com/deatri