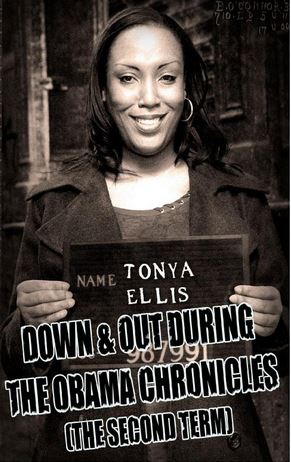 Tonya Ellis is a writer/comedian/humorist who currently resides in Houston, Texas. She’s a manager in a health food store for her day job. She is a lifelong writer and a border line O.G. Hip Hop head who lived in NYC for a very long time up until recently. She says, “I loved Kendrick Lamar’s performance at the Grammy’s this year. As Kendrick Lamar’s artistic performance was the personification of art as a higher form of protest (which goes along with the more positive traditions of Hip Hop).”

Tonya’s book Down & Out During the Obama Chronicles (The Second Term) can be found at Smashwords.com and also Amazon/Kindle. She has also completed three screenplays and says, “If anyone knows how to break into showbiz on the screenplay level, please feel free to contact me at: Talk2t@mail.com.”

She goes on to state, “As I consider myself an artist with sensitive sensibilities, I am definitely hoping not see the Tupac Amaru Shakur movie written by Euro-Americans that will probably be released soon. As I do not understand why the very essence of any story about 2Pac, who is essentially an anti-establishment artist moving against the grain of the ‘system’, should be written by writers who are not African American. With the ‘system’ in question being the ‘Hollywood’ system. Like so many institutions in America the ‘Hollywood’ system is one that has been setup primarily for the profit of Euro-Americans.”

BPM: What do you read for pleasure?
Charles Bukowski, Junot Diaz, Zadie Smith, Chelsea Handler, and any kind of comedy/satire book.

BPM: What is your e-reading device of choice?
The Kindle produced by Amazon.

BPM: Describe your writing space or desk.
Starbucks on Westheimer in Houston, TX.

BPM: Where did you grow up, and how did this influence your writing?
I grew up in Houston, TX  and just relocated back down here after more than 15 years up in NYC. My hometown H-Town has had a huge influence on my writing and life (I’m 44yrs old) and I am still a Southern Girl at heart.

BPM: When did you first start writing?
I started writing at 11 or 12 years old.

BPM: What’s the story behind your latest book?
Displacement and Relocation related to the economic downturn.

BPM: What motivated you to become an indie author?
Always did write on an ongoing basis and indie author platforms seemed like one of the most democratic options to arrive on the scene as of lately.

BPM: What is the greatest joy of writing for you?
Immediate organization of chaos into order. It’s a very hands on immediate form of therapy for me.

BPM: What do your fans mean to you?
I’m too new for fans but I will be checking as things roll along. I don’t like the term fans generally. It sounds condescending a little, I prefer the term “supporters” maybe. Because without them I’m certainly nothing.

BPM: What are you working on next?
My first is called Down & Out During the Obama Chronicles (The Second Term). The next one is in the making (contemplation stages) and will more than likely be a follow-up sequel of sorts.

Down & Out During The Obama Chronicles (The Second Term) by Tonya Ellis
This book is a humor/memoir about family, life, love & temporary homeless-ness in the current day weak economy.

Purchase Down & Out During The Obama Chronicles (The Second Term) by Tonya Ellis
https://www.amazon.com/Down-During-Obama-Chronicles-Second/dp/1500140805