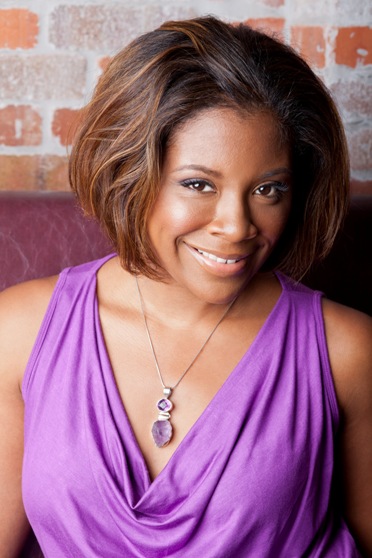 Sadeqa Johnson is a former public relations manager who spent years working with well-known authors such as JK Rowling, Bebe Moore Campbell, Amy Tan and Bishop TD Jakes before becoming an author herself. Her debut novel, LOVE IN A CARRY-ON BAG was hailed by Ebony.com as “this summer’s hottest read.”  It was the recipient of the 2013 Phillis Wheatley award for Best Fiction and the 2012 USA Best Book award for African-American fiction. Originally from Philadelphia, she now resides in Virginia with her husband and three children. SECOND HOUSE FROM THE CORNER is her second novel.

BPM:  When did you get your first inkling to write, and how did you advance the call for writing?
I’m originally from Philadelphia. As a kid, I started off wanting to be an actress. When I graduated high school, I moved to New York and attended Marymount Manhattan College as a Theatre Arts major. It was as a student that I started fooling around with poetry, which turned to playwriting, screenwriting and ended up with novel writing. I landed a job working in publishing after college and it was there that I became very serious about my writing. My first novel, Love in a Carry-on Bag took me over ten years to finish. I started writing it when I was a publicity manager at G.P Putnam’s Sons.

Every day I would close my office door at four o’clock and write for the last hour of the workday. On my commute home, I edited the pages. Once I got married, I left my corporate job to write and raise my children, but still nursed a burning desire to tell stories. I wrote during naptimes, between feedings, in the midst of sleep deprivation and my kid’s ear infections. The daily pressures of caring for a young family motivated me to finish the book. I was very much like Felicia in Second House From the Corner. As much as I loved being a mother, I didn’t want that role to be my only claim. I knew that it was important for me to carve out something that was only for me, and writing novels was it. My novels are my legacy.

BPM:  What makes your writing different than others?
I’m a lover of words and keep a thick, old school thesaurus on my desk, which I use to deepen the meaning of the text. I don’t like to rush when I’m writing, and I’ll work on a paragraph for three days if it takes that long to make it sound good. Although I’m a commercial fiction writer, I work to bring poetry, beauty and music to my work. My goal is to make readers pause over a delicious sentence, giving them no choice but to read it again.

BPM:  Can you share a little of your current work with us? Introduce us to your book and the characters.
I love everything about Second House From the Corner. In the novel, Felicia Lyons, a stressed out stay-at-home mom struggles to sprint ahead of the demands of motherhood, while her husband spends long days at the office. Felicia taps, utters mantra and breathes her way through most situations but on some days, like when the children won’t stop screaming her name or arguing over toy trucks and pretzel sticks, she wonders what it would be like to get in her car and drive away.

Then one evening the telephone rings, and in a split second Felicia’s innocent fantasy becomes a hellish reality. The call pulls her back into a life she’d rather forget. Felicia hasn’t been completely honest about her upbringing, and her deception forces her return to the Philadelphia of her childhood, where she is forced to confront the family demons and long buried secrets she thought she had left behind.

BPM:  Did you learn anything personal from writing this book?
I wrote Second House From the Corner in about a year and a half, which was much different from my ten-year haul with Love in A Carry-on Bag. I learned to outline and draft quickly, and then to just punch the story out and fix it later. There were a lot of loving hands that touched Second House From the Corner and for that I am so grateful and utterly proud of the finished product.

BPM:  What would you like to accomplish after this book is released?
Don’t laugh, but my deepest desire is to be on the New York Times best sellers list. I have been putting that out into the Universe since day one so I know it’s going to happen. I also plan to sell the movie rights and be paid (well) to consult on set as the movie is being filmed. My children are going to love walking the red carpet. Selling the foreign rights and seeing my novel printed in several languages would also make me happy. Eventually I’d like to teach a writing group and get out on the motivational speaking circuit.

BPM:  Are any scenes from the book borrowed from your world or your experiences?
Oh, yes. I am a mother of three children. My kids were about the age of Felicia’s when I started writing the book and a lot of her experience of feeling overwhelmed and worn out with the duties involved with caring for small children was what I felt as a young mother. I still feel it at least four times a week. She taps her way through it, I go to hot yoga, run and meditate to find my center.

BPM:  What should readers DO after reading this book?
Tell all of their friends to buy a copy. I really believe it takes a village to make a best seller. Word of mouth is the best form of advertising so please, please tell a friend. Your review on goodreads.com and all of the retailer’s website would also be wonderfully helpful.

BPM:  What are your career goals as a writer? Have you accomplished most of them?
Right now I really admire Attica Locke. She wrote a book called The Cutting Season that I couldn’t put down. Then one night I was watching the show Empire, and her name popped up in the credits as producer and writer. Immeditately, I had goosebumps. I’m so proud of my fellow writers when they cross over and do big things. As I sat watching, I thought, could I write for television?  Mmmm, I’m just going to let that thought marinate. Hosting a show on television would also tickle my fancy.

BPM:  What have you realized about yourself since becoming a published author?
I’ve realized that I am exactly where I am supposed to be. Every moment in my life from going to college in New York City as Theatre arts major, to my first two jobs in publishing as a publicist, to starting my own publishing house and having to do everything possible to get the word out on Love in a Carry-on Bag has led me to this moment. I’ve worked hard, I deserve to be right here and my future is even brighter. I can’t wait to see what God has in store for me.

BPM:  What are you the most thankful for now?
I’m grateful for my health and the health of my family and close friends. I enjoy waking up every morning, getting my kids off to school (most times without arguments and tears but not always), putting on a pot of coffee and going to work in my robe. God is always amazingly good to me. Oh, and I have a sexy, supportive husband to boot.

BPM:  Do you have any advice for people seeking to publish a book?
Don’t quit. Writing takes time and dedication and it is very important to be true to the craft. Take writing classes, form a writing group and read as much as you can. Give yourself time and permission to grow, and be patient with yourself. Believe in your creativity above all. Allow the magic to flow.

BPM:  What’s next?
I’m working on my third novel, And Then There Was Me. It’s about deception and betrayal. It’s scheduled to be published by Thomas Dunne Books spring of 2017 so stay tuned. And click right over to my website, www.sadeqajohnson.net and subscribe to my blog. I’ll keep the latest news listed there. I’m on all of the social media outlets so get in touch with me. I’d really love to hear from you.