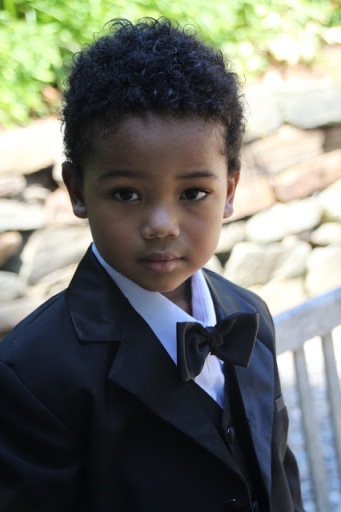 Tyler Stallings is an outgoing kidpreneur with an active imagination. Although one of the 4-year-old’s favorite hobbies is running a fictitious construction company and building things, he enjoys picking out his own books, discussing them, traveling and meeting awesome people from all parts of the world.

Like many children his age, Tyler began making countless excuses why he could not go to bed at night. His mother, Andrea Blackstone, decided to make up a game about traveling around the world, to encourage her son to settle down and go to sleep. Playing the game where Tyler transformed into a superhero who travels became so popular, it became a welcomed ritual when he was three. After Tyler’s questions about places he traveled in his imagination increased when he turned four years old, Blackstone asked Tyler if he wanted to write his own book. When Tyler agreed, she decided to invest in her son’s dream to become an author at a young age.

Tyler’s journey to co-write a book with his mother evolved into an early lesson in entrepreneurship. Since Tyler enjoys helping his mother with community work, he agreed that giving back to causes should be a part of his book project. Under the umbrella of Lois’ Giving Circle—which will be established in the name of his late grandmother who was an elementary school teacher, Tyler will create or support community projects.

Since Tyler and his mother are both children of veterans, a portion of the proceeds from the limited edition of “Tyler Goes Around The World” will be donated to organizations supporting veterans who served our country. With the help of his mother, the honorary CEO of Kid Time Enterprises, LLC aspires to spread the love of pursuing passions at any age, doing good things and reading books, one superhero mission at a time!

BPM: Tell me about your book. How did you come up with that (story, angle, idea)?
Like many 4-year-old children, Tyler did not like to go to bed at night. We began pretending to travel to places, after tying an imaginary cape around his neck. He eventually started asking to fly around the world, by using his imagination. Our game became a creative way to get him to go to bed with less resistance.

BPM: Give us some insight into your main characters or speakers. What makes each one so special?
Tyler is a superhero in his book. As the main character, he discovers new places and makes new friends in nearby places and countries located far away from home. “Super Tyler” is unafraid to embrace cultures which are unfamiliar to him. He sees or learns something different each time he lands in a new place after flying. The animals and people he encounters welcome him in return.

BPM: What inspired you to sit down and actually start writing this book? Why now?
Tyler wanted to play his adventure game so frequently, I thought it may have potential to appeal to other children and parents. We began to study countries and discuss them at night while playing the game. I eventually asked Tyler if he would like to write a story about his adventures, since he loves books, and he has always been nearby while I worked on writing assignments. Tyler often handed books to me and begged me to read them to him while I was working on the computer. Writing “Tyler Goes Around the World” was a way to spend time with each other in a meaningful way without doing something that involved the television or electronic devices. I think kids get enough of that. I wanted to spend time with him face-to-face without distractions. He wanted and deserved my undivided attention.

We decided to publish the story this year because he is older than when we created the game. Since he is four years old, he can now provide more input and help. Lastly, I felt that a story promoting tolerance and togetherness is timely. The world is a diverse place. In my opinion, we need more stories to reflect diversity so that more young people may feel included in the human experience.

BPM: What did you enjoy most about writing this book?
I enjoyed watching Tyler mature while learning new skills. He felt excited to pick out what he wanted to see in the book and make decisions while producing the project. When he made mistakes, he learned lessons that helped him to improve.

BPM: What kind of research did you do for this book?
I showed Tyler a globe, then I allowed him to pick out some appealing places to include in his manuscript. We studied the culture, animals, customs, temperature, words and related elements of story development. The Internet does not always provide reliable information, so I made calls to embassies to try to confirm what we read about places in different places in the world. Additionally, I called American Indian cultural centers to consult with experts about Native American culture.

BPM: What are the five words you would like to be remembered by as a writer?
I contributed to making a change.

BPM: Did you learn anything personal from writing your book?
I learned that it is true that kids are sponges. My son embraced the idea that he could be viewed as a superhero who brings people from around the world together, because I introduced him to the idea that treating others well is important. He usually does not fear learning about people who are from other places, or who may not share the same ethnicity, or speak the same language. At the same time, I learned that making extra effort to empower children of color can be extremely important. They can also be main characters in stories of all kinds. Many do not have enough opportunities to see themselves represented in positive ways, since positive stories are often not shared as much as negative news. Before we began the project, I felt very disappointed by the lack of good stories about boys of color that were available online. Not everyone embraces Tyler’s journey, but he is learning early that he must believe in himself to achieve anything.

BPM: Can you share some stories about people you met while working in the community?
I allowed Tyler to become the focus of Kid Time Enterprises, LLC and decided to make him the honorary CEO. Since he expressed interest in business and supporting veterans, he met hundreds of people while collecting donations and delivering items to these homeless and elderly heroes. It was his idea to create Give Back to Veterans Day, because he wanted to do something special for them. Additionally, we met youth and adults while giving away thousands of books in Maryland, the District of Columbia and Virginia, with the help of a company called Discover Books.

I think one special moment was hearing veterans thank Tyler for bringing hygiene and grooming products to them. They have done so much for our country, yet they thanked him, and he even received a letter of thanks! Tyler spoke on the microphone for the first time at one of his events. He told me that he felt good to do something nice. The governor of Maryland recognized Tyler for his interest to help the community at a young age. Several elected officials know about what he is doing to help veterans and other children.

Lastly, during one of Tyler’s last book giveaway event, many children who reside in areas that many people overlook ran to pick out free books of their choice. Some of their parents asked me if they could have more than one. They were extremely excited to have them. Making the selections will allow these students to have books of their own to read this summer. I learned that many kids may just need more people to show they care about them. Companies like Discover Books, Wegmans and nonprofits like Start A Snowball invest in communities. In addition to members of the community who stepped up to help, their support and donations made a big difference in exposing youth to positive experiences and exciting literary events. I appreciate their support.

BPM: What were your goals and intentions in writing this book?
My goal was to establish a platform for Tyler to write books and tell stories that he would like to create as he grows as a writer and kidpreneur. The project introduced him to the idea of having a work ethic, budgeting, saving money, and striving to earn it. Plus, learning can be fun if we take the time to teach children new skills as they participate in a process. We hope to create interest in Kid Time Enterprises, LLC so that we can also help other children to embrace their dreams, and pursue their passions, with encouragement from supportive adults.

“Tyler Goes Around the World” is our first project. I want to remind other parents to take time to consider their children’s ideas, even if they happen to express interest in something unusual. A child can inspire a positive movement. Our goal is to inspire people of all ages to pursue their dreams.

Finally, I want boys to feel encouraged, too. I do not feel that boys have the benefit of enough mentorship or encouragement at a young age. I want them to feel they are valued and expected to excel, no matter what they may often hear, or see in mainstream media.

BPM: What projects are you working on at the present?
Tyler is working on his next adventure in his book series. He is taking pictures for his first coloring book. I am transcribing another story that he told me that he wants to publish. After he figures out the ending, his first draft will be complete.