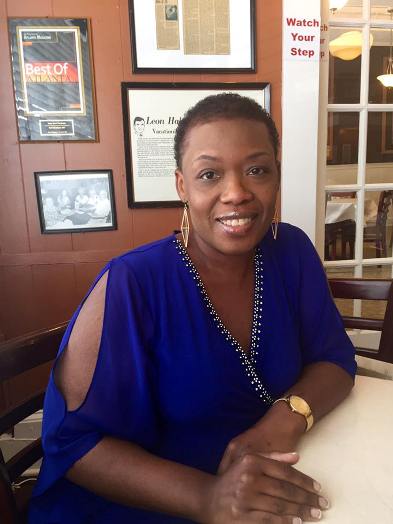 Eartha Dunston has been writing since she was a freshman at Alabama State University. She first realized her love for writing when one of her best friends secretly entered her into his fraternity’s poetry slam. She anxiously shared her writings publicly for the first time and received an overwhelming standing ovation! It was a pivotal moment, and she knew in that instant she would one day write professionally. Her educational background coupled with becoming a mom, inspired her to begin writing about issues that affect children such as positive self-image and loosing a beloved family matriarch. She has spent the past few years honing her craft under the tutelage of many award winning and accomplished authors.

She holds a Master’s Degree in Social Work with a concentration in Clinical Studies from Virginia Commonwealth University. Eartha enjoys traveling, encouraging others through life’s obstacles, reading and crafting stories in all genres. She currently resides in South Florida. Her first Children’s novel is entitled “The Hair Adventures of Princess Lindsey Sidney.” The book introduces us to a beautiful princess who celebrates her hair as it transitions textures and styles throughout the week.  Visit her website: http://www.earthadunston.com

BPM: When did you get your first inkling to write?
I’ve always enjoyed writing. I started keeping a journal and writing poetry when I was in college. At the time, I never intended to share my writings publicly. I was going through a very tough time. Both of my parents were terminally ill. I was struggling emotionally, financially and every way imaginable. Writing consoled me. It was my escape. I always felt better because my journal and poems were the one place I could be totally raw and honest about my feelings. I could cry out to God and be mad at him at the same time for what I was going through; and no one was there to judge me.

One of my friends discovered a poem I had written, and he persuaded me to perform at his fraternity’s poetry night. I protested with everything in me, but eventually gave in. I was determined not to cower. To my amazement, the audience loved it; and I received a standing ovation. I knew in that instant I wanted to write professionally one day.
Within the next few days, several individuals and organizations invited me to perform on campus and at local spots in the city. It was an epiphany for me.

BPM: How did you advance the call for writing?
After graduate school, I settled into a comfortable career, and tucked my writing dreams away. However, the passion never died. I was visiting my brother in Atlanta one summer, when I received profound confirmation about my writing that changed my life. I dusted off all my old ideas and put work behind my faith and dreams. I started traveling the country to attend writing seminars and conferences. I ventured to New York, Houston, and Atlanta to name a few. I soaked up as much knowledge about the industry and writing process as I could. I attended seminars and writing classes featuring some of the best in the business.

A couple of the authors and I connected. One accomplished, seasoned author took me under her wings and began to motivate me with words of encouragement. Another well-known author referred me to her publicist, and things took off immediately. It got to the point where all the things I thought would be a challenge were lining up without much effort. It’s as if my dream started chasing me. I had written the Princess series of books a couple years earlier but never attempted to publish them. I had also started working on a novel. A couple of my writing mentors continued to nudge and encourage me to move forward. I could no longer mask the dream.

I knew it was time to launch my long-desired writing career. I knew all this was not coincidental, but divine connections orchestrated by God, in His timing.

BPM: Introduce your book, The Hair Adventures of Princess Lindsey Sidney and the characters.
The main character of the book, Princess Lindsey Sidney, admires her hair each day of the week as it transitions from straight to frizzy and all textures in between. My debut children’s book, entitled The Hair Adventures of Princess Lindsey Sidney, was birthed out of the struggles with my daughter’s hair. I was never good at hair. I cropped mine off years ago and never looked back. God really has a sense of humor. He gave me a beautiful daughter with the biggest, thickest, and coarsest hair I’ve ever encountered. I knew I was in trouble when it came to grooming it. I knew there had to be other parents going through the same struggles. I knew others could benefit from a book that celebrated various phases of our sometimes straight, sometimes kinky.

I would spend hours every Saturday on my daughter’s hair trying to wash it, comb it and make it pretty. It would never be as sleek or straight as I wanted. We would both be in tears. However, I noticed when her father and I told her she was a beautiful princess with the prettiest hair, she believed it! Even with a pile of untamed frizz on her head, she would stand in the mirror and admire it because we told her she was beautiful. It made me realize the power of instilling positive self-image in children at a young age. She thought her hair was beautiful in all its imperfection because we told her so.

BPM: Tell us about your passion for writing. Why do you write? What drives you?
I write because it’s liberating. I write because it is the one thing I will always do even if I never make a dime from it. I love writing and if my writing can help someone along the way, even better. Creating characters and giving them life is exhilarating. I ‘m driven by the power and emotion well developed characters evoke. I’ve gotten feedback from beta readers that tell me they can’t stop thinking about a particular character in my novel or they really felt as if they were there with the characters. When I hear that, I know I am on the right track. I will always have a passion for writing, whether it’s another children’s book, a simple article, or a fast-paced spy novel. I’m just getting started!