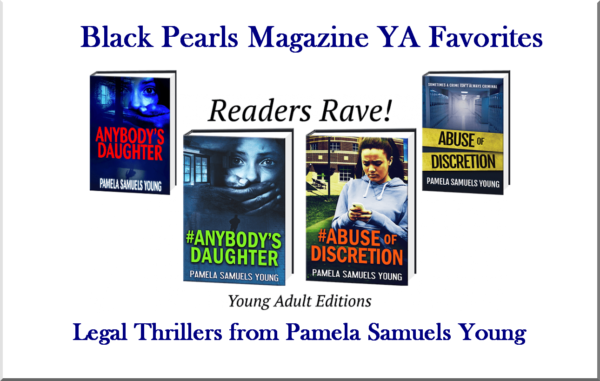 Author and attorney Pamela Samuels Young still remembers the exact moment she decided to take on the subject of teen sexting in a legal drama.

“My law school classmate was griping about yet another teen client charged with possession of child pornography as a result of sexting,” Young explains. “I was absolutely floored when he told me that prosecutors were not only charging kids, but requiring them to register as sex offenders if convicted.”

Abuse of Discretion, Young’s eighth mystery, provides a shocking look at the consequences of teen sexting and also takes readers inside the juvenile criminal justice system. In the book, 14-year-old Graylin is charged with possession of child pornography. The A-student and his father soon find themselves embroiled in a legal nightmare. Abuse of Discretion is the sequel to Young’s thriller, Anybody’s Daughter, which garnered her an NAACP Image Award for Outstanding Fiction.

Before writing Abuse of Discretion, Young had no idea that a teen who sends a naked picture of themselves or another minor  could be charged with distributing child pornography. “I’m a lawyer and I didn’t know this,” Young says. “Parents need to talk to their children and be aware of what they’re doing on their computers and cell phones. When the police show up at your door, it’s way too late.”

Young feels strongly that society sends mixed messages to children. “Today’s kids are inundated with sex,” Young notes. “It’s everywhere: on TV, in music, in movies, in advertising. Our teens watch shows like The Bachelor and see a guy making out with three or four nearly naked girls in less than an hour. So when they hit puberty and start exploring their own sexuality, of course they don’t think it’s any big deal to send a naked picture. We shouldn’t penalize them with life-altering criminal penalties for being too immature to fully comprehend the consequences of their actions.”

A few states have changed their laws so that a child caught sexting would be required to serve community service as opposed to facing pornography charges.  “The law needs to catch up with technology,” Young says. “Child pornography laws were intended to protect children from sexual predators, not used against them. It’s time for all states to update their laws.”

Young doesn’t excuse the more egregious teen sexting cases. For example, where a girl or boy is pressured into sending a naked picture that is then posted all over the Internet or used for blackmail purposes. “There have been instances where the victim was so devastated that it led to suicide. Those cases should be dealt with more severely.”

A former discrimination attorney, Young points out that Abuse of Discretion is the perfect title for her book. “Without a doubt,” she says, “abusing their discretion is exactly what prosecutors are doing.”

Teen Sexting Facts
• 30% of teens have sent naked photos, 57% have been asked to send one.

• In many states, a teen who sexts could be criminally charged with possession/distribution of child pornography.

• Teens convicted of child pornography charges as a result of sexting could be required to register as sex  offenders.

“Child pornography laws were intended to protect children from sexual predators, not used against them.”

• Talk openly with your kids about sexting. Share online articles about kids who have faced expulsion from school or criminal charges so they understand the consequences.

• Get social media savvy. You may never be as proficient as your kids online, but never stop learning about the latest social media apps. There are lots of free tutorials on YouTube.

• Set ground rules for social media usage, including permissible and non-permissible apps and websites. Be specific about what your kids should and should not be posting online.  For more information, visit netsmartkids.org.

Pamela Samuels Young is an attorney, anti-trafficking advocate and award-winning author of seven mystery novels. Her thriller Anybody’s Daughter won the NAACP Image Award for Outstanding Fiction and was a Top Ten pick by In the Margins, the best books for at-risk teens.

The former journalist and Managing Counsel for Toyota specializing in Labor and Employment Law is also a natural hair enthusiast and the author of Kinky Coily: A Natural Hair Resource Guide. Pamela received her bachelors degree from USC and also earned graduate degrees from Northwestern University and UC Berkeley School of Law.

The Compton native is a frequent speaker on the topics of sex trafficking, fiction writing and self-empowerment. Pamela’s novels are available in print, ebook and audiobook. Visit her website to read an excerpt.

Need a dynamic keynote speaker for your event? I would love to help make your event a success. Most requested topics: Motivation, Personal/Career Growth, Pursuing Your Passion, Writing, and Spiritual Growth. To book me for your workshop, conference or event email authorpamelasamuelsyoung@gmail.com.