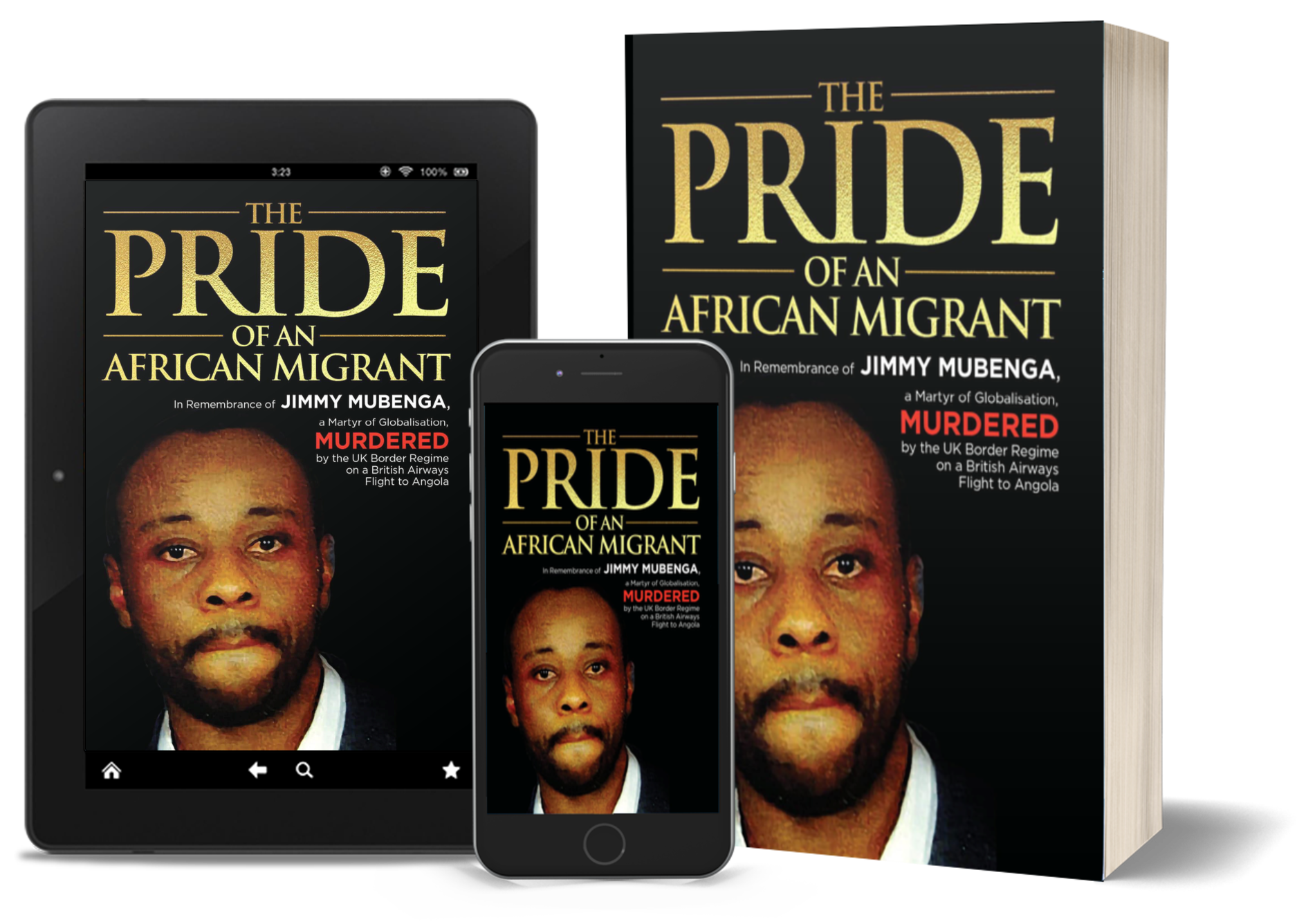 The Pride of an African Migrant: In Remembrance of Jimmy Mubenga, a Martyr of Globalisation, Murdered by the UK Border Regime on a British Airways Flight to Angola by Massocki Ma Massocki. Publication date: May 4, 2020

Why was this book written and what is the mission behind this project?
The Pride of an African Migrant outlines barbaric acts of torture to which African asylum seekers are being subjected to in the United Kingdom.

The book was written in remembrance of Jimmy Mubenga, an African asylum seeker who was tortured and killed by the UK border regime at London Heathrow Airport on a British Airways flight to Angola on October 12, 2010, after resisting his deportation.

Having peacefully protested against the killing of Mubenga, a fellow asylum seeker, Massocki Ma Massocki, the author, was arrested and detained naked in a cold cell. After some time, even the place he was staying at was set on fire, ready to kill him.

Despite this, each year, the terrifying Mediterranean Sea and the dreadful Sahara desert claim the lives of at least 5,000 African migrants en route to Europe. And those who have conquered the sea and the desert still have to survive, in the land of Europe, the barbarism and inhumanity of immigration officers.

The Pride of an African Migrant aims to fight xenophobia and promote harmonious coexistence between all living beings, in particular, between migrants and Europeans, and heighten people’s compassion and wisdom, which are imperative for world peace. The book’s goal is also to make Africans aspiring to migrate to the European Union or the US be more informed of the issues related to their plans so that they can be better prepared.

The Pride of an African Migrant is a frank expository conversation for today and of all time. It is a book that every immigration player should read—from potential migrants to diplomatic staff, immigration officials, foreign policy advisors… every person with a migrant family member or neighbour.

PRAISE FOR ‘THE PRIDE OF AN AFRICAN MIGRANT’

‘Mixing politics and philosophy with the personal, Massocki recounts his troubling yet powerful tale of migration from Africa to Europe. His memoir weaves in a rich and unusual variety of voices: from individuals he met along his journey, to those of presidents, philosophers, musicians and academics. The result is a provocative, political memoir that seeks to inform people of the realities of migrating to Europe: a call on Africans to embrace their pride and dignity.’
—Dr Melanie Griffiths, University of Birmingham, England, UK

‘This is a contemporary mental, physical, and political odyssey. I have not come across such a graphic and personal account of a migrant’s extensive experience of former Prime Minister Theresa May’s “hostile environment” in all its finery. It is a powerful book. The more I go back to it, the more I see its potential to change minds—those of migrants and even those of people not forced to migrate. I think its publication is very significant.’
—Bill MacKeith, founder–member of Campaign to Close Campsfield and End All Immigration Detention (also involved with the Bail Observation Project (BOP), National Coalition of Anti-Deportation Campaigns (NCADC) / Right to Remain, Migreurop, Barbed Wire Britain, and Detention Forum)

‘Where else but in the telling of stories of oppression and injustices will one be able to grasp the rawness of avoidable human suffering? No other writer but Massocki Ma Massocki can bring us, in the most gripping way, a story so real that we feel our hairs stand on their ends. We see the gaping horror of what asylum seekers from Africa faced in the UK. Through this book, Massocki is calling for our compassion, asking us to collectively stand up to this scourge of violations to human rights. Massocki believes that we can overcome anything through collective, worldwide efforts in advocating for our rights to dignity.’
—Dr Toyin Ajao, African Leadership Centre and University of Pretoria