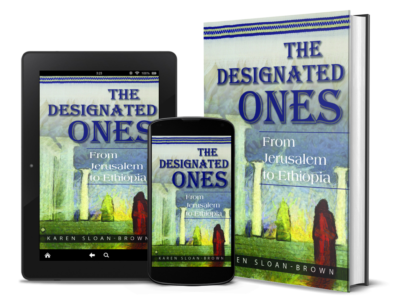 Click here to hear the author discuss their books and to hear an audio preview of the book. If you can’t hear the authors reading, update your Adobe Flash Player, go here. Do not install McAfee Security Scan Plus. Don’t forget to share with friends!

The Designated Ones Trilogy by Karen Sloan-Brown

It’s 2014. Grieving the loss of family members and friends killed in a plane crash, renowned megachurch pastor Priscilla Sinclair sits on her patio, prepared to take her own life. But before she can end it all, a stranger shows up at her Virginia home and changes everything.

Trying to strengthen her faith, the stranger challenges Priscilla to lean on God’s promises and on the examples of faith left to her by her ancestors. He tells her a story she has never heard before. The story goes back over 3,000 years, beginning with Aaron, God’s designated high priest during the Exodus, and explores the line of designated ones through the times of King David, Solomon, the exile in Babylon, the crossing of the Arabian Desert into Saba, the migration across the Red Sea into Axum, the birth of Christ, and the lives of the generations that have followed.

In this thrilling journey through history, Priscilla is given a chance to go from failure to faith and live to fight another day. But will she accept the stranger’s challenge?


Purchase The Designated Ones: From Jerusalem to Ethiopia by Karen Sloan-Brown
https://www.amazon.com/Designated-Ones-Jerusalem-Ethiopia/dp/1944440143

Short Cut by Karen Sloan-Brown
Ernest was the owner and head barber at the King Cut Barber Shop. He could cut out the likeness of Barack Obama, Marcus Garvey, Martin Luther King, Jr., and Malcolm X with the words ‘By Any Means Necessary’ onto a client’s scalp with his straight-razor that would rival any accomplished artist. He’d done all right for himself and his family with a successful business on a rough corner in the hood, except he wanted more. All he needed was a loan to make his dream of In Ernest Gentlemen’s Spa come true. When the bank said no, Eva, the attractive wife of Pinnacle Financial president, said yes. Giving Ernest more than he bargained for, his dream turned to a nightmare. When the volatile cocktail of passion, jealousy, and money are mixed together somebody is bound to end up dead.

Daniel, Luke, and John by Karen Sloan-Brown
The only thing Luke was sure of was that he didn’t want to be like his father, John. Raised on a one-way ghetto street in North Philly the odds weren’t in his favor. Nothing special had ever happened to him until he met Ruthie on the day Martin Luther King Jr. was killed. When Ruthie got pregnant, he finally had something to live for. Even being drafted into Vietnam wasn’t about to take that away from him. Back home Ruthie did hair to help make ends meet and developed a cream that made kinky hair curly. Together she and Luke built a successful cosmetic company. Luke’s dream was to pass it on to his son, Daniel. Except Daniel doesn’t want it, he wants to box and be the next Mike Tyson. This is a story of love, loss, success, disappointment, redemption, and acceptance.