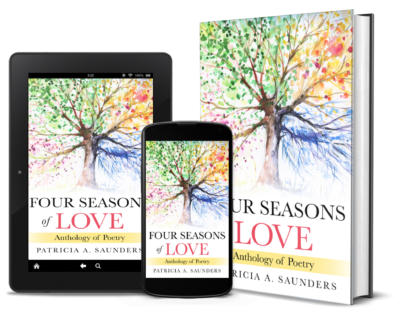 Click here to hear the author discuss their books and to hear an audio preview of the book. If you can’t hear the authors reading, update your Adobe Flash Player, go here. Do not install McAfee Security Scan Plus. Don’t forget to share with friends!

Patricia A. Saunders was born and raised in Connecticut before relocating to the San Francisco Bay Area nearly 27 years ago. She received her Master’s in Management from the University of Phoenix in 2011.

After the passing of her mother who had Alzheimer’s, Patricia decided if she inherited the disease she wanted her words to be her legacy and that all the words that she kept to herself were to be released.

Recently she was chosen among 100 authors from around the United States to participate in the Author’s Pavilion at the 2018 Congressional Black Caucus Convention in Washington, DC.

Her latest book, Four Seasons of Love, covers all aspect of love broken into four chapters relate to the four seasons.

Patricia, a Supervisor in Silicon Valley, in her spare time she enjoys to travel, wine tasting, and spending time cooking for friends.