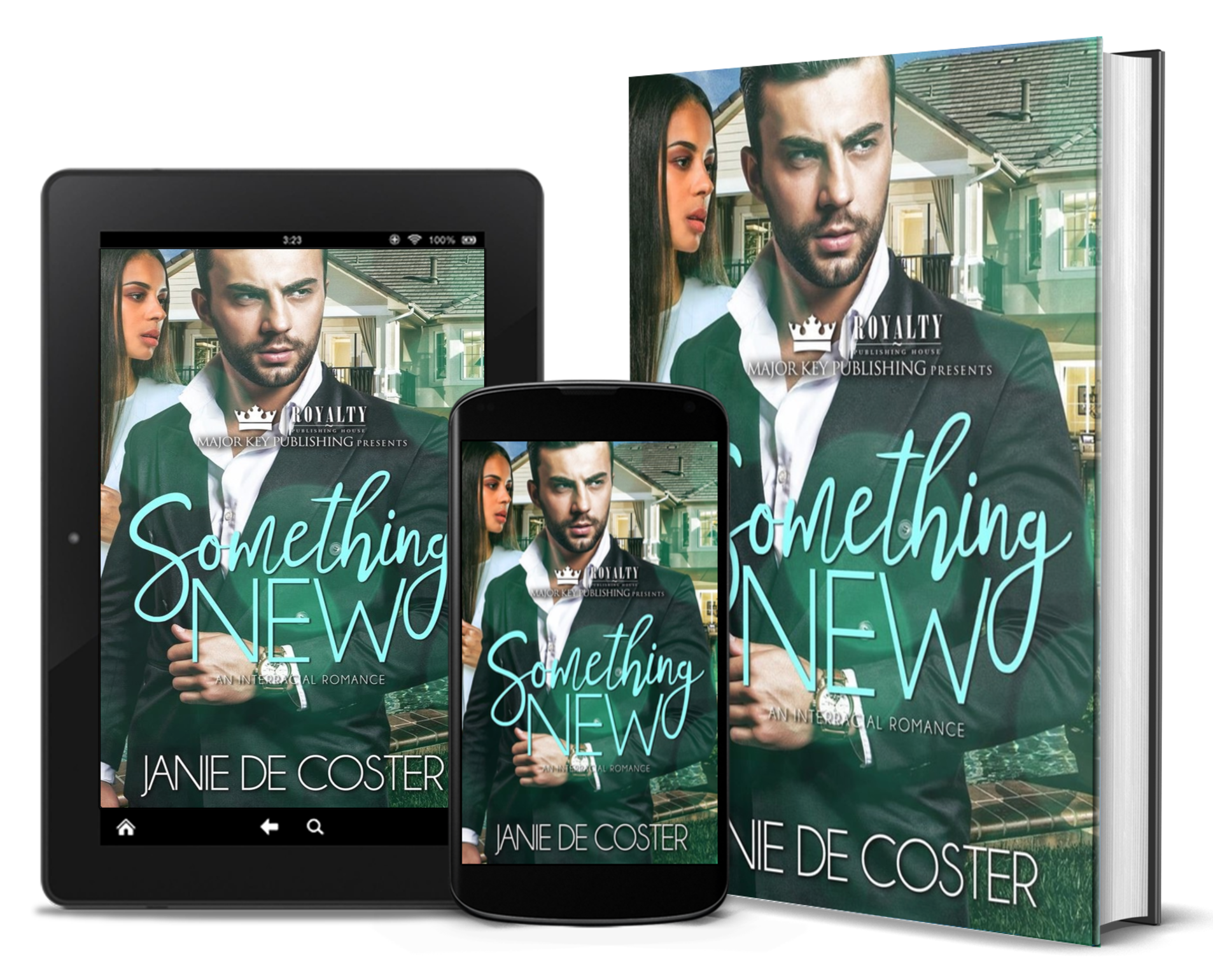 Something New: An Interracial Romance by Janie De Coster

Follow the journey of an interracial couple who are not only from different worlds but worlds that goes beyond the color of their skin. Tobias Benton- a handsome, white rich and successful businessman who is soon to inherit his father’s billion dollar company. Tobias has been dating Sharon English, a beautiful and wealthy lady who owns several Art Galleries. From the world point of view, they are the Barbie and Ken couple who are destined to marry and have a wonderful life together that is until…..

Brylane Robinson- a beautiful, bright and intelligent black sister who lives in the housing projects on the South side of Chicago, steps into the picture. Brylane fights for survival and a better life for herself in the hood.

One morning on her way to work, a handsome man literally runs into her. When their eyes met so did their hearts. Will Brylane and Tobias venture into Something New?

Bayoubabe 5.0 out of 5 stars Oooh weeee!!!
What a hot story. The drama has me reeling. When a man has a crazy obsessive witch on his trail, his life is pure hell. Tobias Benton is finding out just how evil Sharon can be when she does not get her way. His poor mother Carolyn is just as sad by staying with his philandering father James for years.

CJM 5.0 out of 5 stars Enjoyed Something New
Looking forward to part 2. Definitely looking forward to you putting an end to Sharon’s shenanigans and for Tobias and Brylane to get together. I must say my two problems was Tobias and Toby… the same name to me…also I would love to see at least one other black male character doing well besides Demetrius…Brylane’s brother…like Desmond…maybe he can become more than what he is and not be murdered or go to prison…turning a negative lifestyle into a positive one. Don’t make me wait too long for part 2…thanks

LadyBurger 5.0 out of 5 stars Surprising read
I thought I wouldn’t like it but loved it!! Very well written and the plot draws you in. The family in drama on both sides keeps you on the edge. Can wait for the follow-up.

EXCERPT: Something New: An Interracial Romance by Janie De Coster

Brylane treated herself to a nice hot bath. Then, she put on her favorite pink cotton pajamas and got into bed. Her mind began a replay of the day’s events. Mr. Tobias Benton was certainly at the top of the list. Closing her eyes, she envisioned his handsome face, those deep blue eyes of his staring down into hers as the wind blew through his short wavy hair. Her breath quickened as she thought about his lips and what it would have felt like to kiss them. Turning over on her stomach, she propped her chin up on her soft pillow. Sighing, she wondered, was Vonita right? Could such a man be really into her?

Somehow, she just couldn’t accept the fact as easily. After all, they were from two entirely different worlds. Vonita saw things through a different set of lenses because of how she was raised. Here in the hood, if a white man looked your way, it was either because you owed him some money, or it was the Po Po locking your ass up. Brylane tossed and turned. Her mind continued to race, scrutinizing her attraction to this man and wondering if anything would come of it.

After several attempts at reaching the Sandman, she gave up. Sitting up in bed, she reached over to her nightstand and retrieved the remote, turning on her nineteen-inch TV. She surfed the channels, hoping to find a good movie to take her mind off of the handsome man. Finally, she found an old love story, and she began to immerse herself into the storyline. The lovesick woman ran into the arms of the knight in shining armor, and the next thing Brylane remembered was her mom waking her up to a phone call.

Pulling the covers over her head, she murmured to her mom to tell Vonita she was tired and would call her tomorrow.

“Honey, it’s not Vonita.” Frances sighed nudging her again. Brylane let out a soft groan but made no attempt of getting up.

“It’s some man. He says his name is Tobias,” Frances said, looking down into her daughter’s sleepy face. Brylane’s eyes popped open like a dollar store doll. She pulled the covers away from her body and jumped out of bed. Is this really happening, she thought as she ran to the phone. She paused for a brief moment, cleared her throat, and took in a whiff of air. Exhaling slowly, she picked up the kitchen phone.

“Hello.” She greeted in a low tone.

“Good evening, Brylane. I’m sorry to call so late. I had a business meeting that lasted longer than I expected. I didn’t wake you, did I?” Tobias asked pleasantly.

“Oh no. I was… just watching an old movie on TV,” she uttered softly. For a brief moment, there was total silence on both ends of the line.

Tobias spoke up as he asked, “Are you free tomorrow? I… uh… would love to take you out to dinner… if that’s possible.”

Brylane felt light as a feather. She couldn’t believe he was actually asking her out.

“Um… sure. That would be nice,” Brylane found herself saying. Tobias let out a sigh of relief. He’d never been so nervous about asking a girl out since high school. He was hoping she would accept his invitation, and she had.

“Great, I’ll see you at seven then,” Tobias said. Brylane was about to hang up when she heard his voice again.

“Wait, Brylane. I think it would help me out a lot if I knew where you lived.” He chuckled lightly.

. Brylane’s blood began to run cold. Here it is, truth or dare, she thought. I might as well come clean here and now. That way he can let me down easily, and I could go on with my life.

“I… um… live on the east side of town…Village Town Apartments on Riverdale, apartment 5 B,” she stammered. There was another awkward silence as she waited for the letdown she knew was coming.

“Alright. I’ll be there at seven. You have a good evening, and enjoy your movie.”

And with that, he hung up. Brylane slowly placed the phone back on its cradle. She looked over at her mom who was standing in front of her with a blank look on her face.

“I have a date tomorrow!” Brylane squealed as she hugged her quickly and then ran back into her bedroom. Brylane had a smile on her face that could outshine the glorious sun. That is… until a little voice whispered into her ear, a nice dinner and your car repaired. After that, you will never hear from him again. Her smile slowly faded as she fell into a deeply troubled sleep.

© 2019 All rights reserved. Book excerpt reprinted by permission of the author, Janie De Coster. Do not reproduce, copy or use without the author’s written permission. This excerpt is used for promotional purposes only.

Something New 2: An Interracial Romance by Janie De Coster

In Janie De Coster’s Interracial Romance Something New, the journey continues with even more twists and turns for the couple Tobias Benton and Brylane Robinson.

After a publicized engagement was announced, Tobias fights to clear his name and get Brylane, his true love, back into his life. However, it will not be easy thanks to his jilted lover, Sharon English.

Brylane Robinson had the fairytale romance that most women dreamed of, but it fell apart right at the seams. She found out that her knight in shining armor was already involved with another woman and that she was just his side chick. Brylane feels that she should have listened to all the people who told her that she was being a pawn in a white man’s world.

Will Tobias be able to convince Brylane that she has it all wrong and that she is the woman for him, or will the bombshell Sharon English has up her sleeve seal any chance of them ever having a future together in Something New Part 2? 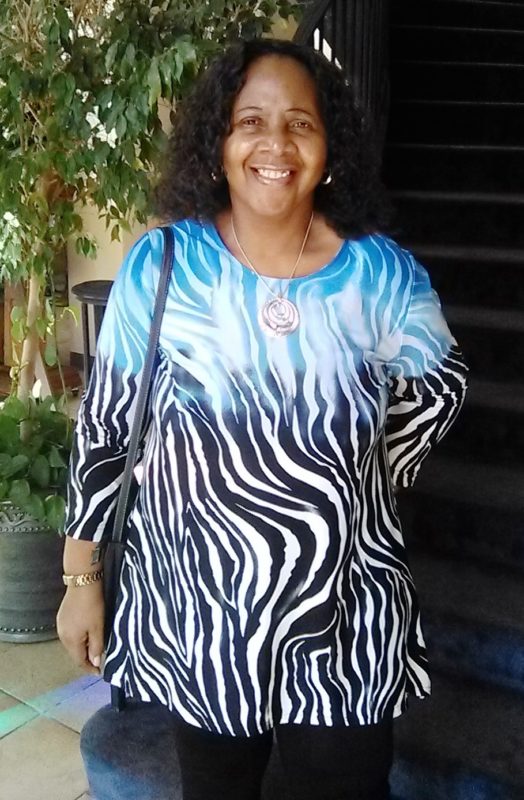 Janie De Coster’s love of writing began in her high school years with poetry. It wasn’t until many years later she heard a spiritual voice instructing her to write a book. Having no idea as to what genre it would be, she just put pen to paper. Janie De Coster writes not only to entertain but to educate as her topics shine a light on today’s society such as Mental Illness, Domestic Violence, Infidelity, and Self-Esteem.  In her spare time, she loves to travel, shop and spend quality time with her family.

BPM: It is such a pleasure to have you join us to discuss Something New: An Interracial Romance. Describe yourself in three words.
Passionate, Spiritual and Witty.

BPM: What drove you to publish your first book? How long have you been writing?
What drove me to write my first novel, believe it or not, was God’s voice telling me to do so. I’ve always read romance novels but I never imagined that I could have written one myself. I had no idea how to begin let alone what to write. But the Holy Spirit led me and several books later here I am. I’ve been on this writing journey for over thirteen years.

BPM: Introduce us to the people in this new book! Give us some insight into your main speakers.
The main characters in this novel are Tobias Benton, a white billionaire who’s looking for true love in his life while Brylane Robinson, a sister from the streets of Chicago struggles to make a better life for herself.

BPM: What’s so unique about their story-line or voice in the story? What makes each one so special?
This story has probably been told hundreds of times. What I think makes it unique is I wrote the story in such a way that it sheds light on not only on the couple’s relationship but the effect it has on their friends and family.

BPM: Share one specific point in your book that resonated with your present situation or journey.
What resonates with me in this story is that I experienced first hand the challenges biracial couples go through since I am a grandmother of a biracial child.

BPM: Do you ever have days when writing is a struggle?
Yes, especially if the story is complex or I am pushed for a deadline.

BPM: Have you written any other books that are not published?
Yes, I have one in my desk drawer collecting dust but I hope to bring it to life soon.

BPM: What projects are you working on at the present?
I just re-released a novel FRIENEMIES. I invite readers to check it out now on Amazon.com.

BPM: What legacy do you hope to leave future generations of readers with your writing?
I want my children, grandchildren, and others to know that with God you can do all things. It’s not going to be easy. You may have to put in a lot of prayer, sweat, and tears. But the race is not given to the swift but to the one who perseveres.

BPM: How can readers discover more about you and your work?
Check out my novels on my Amazon Page:
https://www.amazon.com/Janie-De-Coster/e/B00547Y2DA
Follow me on Twitter:   https://twitter.com/JanieDeCoster